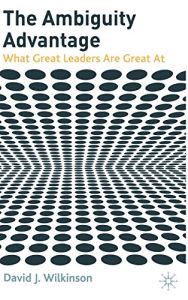 What Leaders are Great at

In a world dominated by constant upheaval, managers might pine for the good old days, when things were simpler and more certain. But that’s exactly the wrong approach, argues David Wilkinson in this eye-opening management study. The future belongs to those who go beyond just accepting change, and instead seek and embrace it. These “generative” leaders are visionaries who encourage conflict, cultivate diversity, and see uncertainty and chaos as wonderful opportunities. This book describes the different kinds of ambiguity and, as concretely as possible, tells leaders how to cope with changing circumstances. Wilkinson makes a compelling case for flexible, collaborative leadership. getAbstract recommends his book to managers seeking an edge in a chaotic world.

For a New World, a New Type of Leader

Once upon a time, the world was simple and tidy. Leaders gave orders, subordinates followed them and everyone lived happily ever after. Alas, that worldview is little more than a fairy tale, yet it’s the vision that still guides too many leaders. In an increasingly complex, confusing and ambiguous world, leaders who cling to old-fashioned viewpoints are doomed to fail. At Polaroid, IBM, Ford and Xerox, old-world, command-and-control leaders netted catastrophic results, even as they claimed to create certainty from chaos.

Today’s management role model is the “generative” leader, an intrepid innovator who embraces uncertainty, craves chaos and invites dissent. Such leaders realize that the world is messy, and that they have little choice but to accept that reality and adapt to it. Great leaders, those who turn uncertainty and ambiguity into opportunity, are visionaries who inspire others.

The pitfalls of old-school leadership are legion. Polaroid was once on the cutting edge of technology. Founder Edwin Land stunned the photo industry in 1947 when he unveiled his one-step process that let users develop their own film in a minute...

Think Outside the Building
9

You Were Born to Speak
8