Summary of The Antiracism Starter Kit 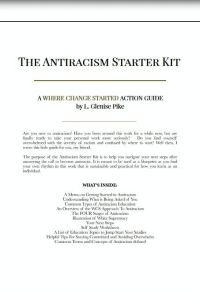 An increasing number of white Americans are seeking to understand structural racism and their own part in it. L. Glenise Pike – founder and executive director of the antiracism education platform Where Change Started – offers a brief handbook on the basics of antiracism. Readers will find an introduction to concepts, self-study worksheets and a simple, actionable agenda for moving forward.

Racism refers to the ways behavior expresses the ideology of white supremacy.

White supremacy means the notion that white people possess natural superiority to Black, Indigenous and people of color (BIPOC) and therefore would qualify as more deserving of the benefits of society.

Racism perpetuates the ideology of white supremacy. White supremacy has become pervasive in the United States, and practically everyone engages in racist behavior, practices and beliefs, perpetuating the system.

Antiracism means taking action against all forms of racism and white supremacy.

Antiracism differs from activism. Activism typically aims at reversing or opposing racism’s results rather than attempting to root out racism itself. Activism often involves supporting BIPOC-operated businesses and organizations or boycotting businesses that engage in racist or culturally appropriative activities – as well as protesting and attending rallies. Antiracism aims at racism’s causes, which often means doing internal work to eliminate the drivers of your own racist behaviors. Conflating activism and antiracism can create confusion about what you need to do.

Antiracism doesn’t require activism. In fact, a compulsion to become involved in activism before doing the groundwork of antiracism can reflect internalized white saviorism – the view that BIPOC need help from white people and cannot advance on their own.

To become antiracist, work on yourself, encourage others and repay Black people, Indigenous people and people of color for the helpful resources they provide.

These three actions form the foundation of antiracism work: First, work on yourself to discover how your acts support white supremacy; then change those behaviors. Second, offer encouragement to other people to become aware of and dismantle their own racism. In the course of doing this, you will be using helpful resources that BIPOC provide. Hence, third, you’ll need to compensate these BIPOC for those resources.

Becoming antiracist has four stages: becoming aware, educating yourself, interrogating yourself and taking action in the community.

To become antiracist, you first need to become aware that white supremacy exists and that you can help end it. Understanding that you can take part in dismantling white supremacy will help motivate you to learn how you can do this. Hence, the second stage consists of educating yourself to understand how white supremacy has created injustice in specific areas. You can learn from the many instructional resources available online and offline, such as podcasts, documentaries, books and lectures. In the third stage, you compare what you’ve learned with reflections on your own behavior and beliefs. In a process of self-interrogation, you ask how your own behaviors, thoughts and beliefs perpetuate white supremacy. You also observe your own defenses against becoming aware and accountable. Racist bypassing, a common defense, happens when a person attempts to avoid responsibility by claiming that some aspect of their identity exempts them – such as their political convictions, spiritual or religious identification, economic status, generational or geographical factors, or intersectional aspects of their identity. The fourth stage consists of taking actions in your community to inspire others to become antiracist and to work toward racial equality. Many people feel compelled to skip the first three stages and plunge into action, but you won’t know what to do in your specific context until you do the preparatory work. Harm can result from efforts at community action when a person hasn’t fully completed the first three stages.

Use practices for maintaining your commitment to antiracism and preventing overwhelm.

Allowing yourself to get off track during the process of becoming antiracist contributes to the continuance of white supremacy and the suffering of BIPOC.

The following practices can help you maintain your commitment: Define your intentions and expect accountability from yourself. Put your intentions into words and post them in a place where they can serve as a reminder. Consider your situation – including your resources, your personal capabilities and the time you have available to devote to this effort – and work within your limits. Partner with another person who is also working to become antiracist, and demand accountability from each other. Finally, practice kindness and patience with yourself. Respect the difficult emotions that may arise, and meet your own mistakes with understanding.

L. Glenise Pike is the creator and executive director of Where Change Started, an antiracism education platform inspiring individual action and accountability in the fight to end racial inequality and social injustice.

How White People Handle Diversity Training in the Workplace
8