Summary of The Antitrust Paradigm 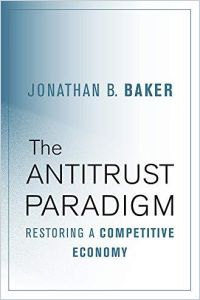 The names may change, but the story remains the same: From Standard Oil in the early 1900s to AT&T in the mid-1980s and Microsoft in the late 1990s, US antitrust laws have sought to temper concentrated corporate power and monopolies for the sake of consumer welfare. Today, Google, Facebook, Apple and Amazon face scrutiny for what many allege are business practices that stifle innovation, thwart new market entrants, and harm customers and suppliers. According to professor Jonathan B. Baker’s scholarly and insightful analysis, American antitrust enforcement has resulted in slow growth and wealth inequality rather than its promised consumer well-being. The time has come, he writes, for a paradigm shift that revitalizes competition in the US economy.

Jonathan B. Baker is a law professor at American University Washington College of Law.

Throughout US history, economic stakeholders have sparred over the merits of monopoly and competition.

Vigorous competition became the preferred path to American economic success following an 1837 US Supreme Court decision in a dispute over exclusive rights to operate a bridge in a particular area. One justice argued that investors would avoid infrastructure projects like roads, canals and railroads if competition curtailed profits. But the prevailing opinion posited that monopolies would inhibit competing firms from introducing innovations. Subsequent nation-building proved the wisdom of the ruling: Competition did not dry up investment or drive up lender interest rates. Economic gains in the United States occurred through the promotion of competition.

The Sherman Antitrust Act of 1890, though, contained vague wording. It left antitrust interpretations to the courts, thus igniting disagreements over how best to achieve prosperity. In the 1940s, the establishment of enforcement directives instituted “free and unfettered competition as the rule of trade.” The rules did not include specific standards but rather an umbrella...