Summary of The Athena Doctrine 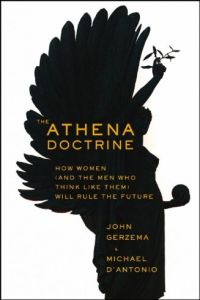 The days of “command-and-control,” winner-take-all leadership are over. Modern leaders must embrace collaboration, empathy and shared purpose, “soft” business skills that are commonly associated with feminine traits. Perhaps that’s why the majority of respondents in a survey of 64,000 people in 13 countries feel that putting more women in charge could make the world a better place. Authors John Gerzema and Michael D’Antonio, a Pulitzer Prize-winning reporter, share case studies showing how Athena-style leaders are making a difference worldwide. However, the authors’ links between the innovative organizations they portray and the feminine values they espouse often seem limited, if not tenuous. You could attribute some organizations’ success to factors such as new technology or social entrepreneurship. Nonetheless, getAbstract appreciates the concept that embracing stereotypically feminine values can improve executive decisions and recommends the Athena concept to anyone interested in leadership development. The book is worth reading for its case histories alone.

The economic crisis that began in 2008 affected the social, governmental and financial outlook of countries around the world. People need new skills to navigate the emerging economic paradigm. Many of these skills, such as empathy, communication and cooperation, are closely associated with feminine traits and values.

Survey respondents, regardless of their country of origin, agree on a list of traits connected to feminine conduct, including: “helpful, intuitive, supportive, emotional, honest, loyal, empathetic, selfless and sensitive.” People also associate “dominant, strong, decisive, gutsy, aggressive, confident and independent” with masculine behavior. A majority of 64,000 respondents believe that a feminine influence would create a “rise in trust and fairness and a decline in wars and scandal.”

To date, men have dominated government and business. The highest ranks have a dearth of female representation. Women currently hold only 16% of directorships at Fortune 500 firms. Many business analysts believe that parity in male-female leadership representation would offer some real advantages.

A Credit Suisse study shows that...