Summary of The Battle to Do Good 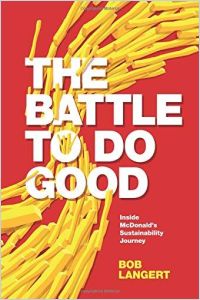 Former McDonald’s executive Bob Langert details the efforts the fast food chain made to respond to a string of controversies. He addresses battles it waged – and resolved productively – with nongovernmental organizations (NGOs), including Greenpeace and PETA, over issues of waste, sustainability, and more. Langert discusses the evolution of McDonald’s partnerships with NGOs, consumer demands to get rid of bulky Big Mac packaging, and non-profits’ attacks on Happy Meals for contributing to rainforest destruction and childhood obesity. With each battle, he reports, McDonald’s found a productive solution that responsibly addressed its critics’ concerns.

Bob Langert, columnist and editor-at-large for the GreenBiz Group, ran the corporate social responsibility and sustainability efforts at McDonald’s for more than 25 years.

Consumers and environmentalists demanded that McDonald’s get rid of the Big Mac’s container, a polystyrene foam (PSF) “clamshell.”

Environmentally aware consumers asserted that the containers McDonald’s used for its Big Mac burger were wasteful. The burgers were sold in a lightweight, large polystyrene foam (PSF) container. It was 98% air and weighed 1/100th of a pound. McDonald’s formed an unlikely alliance with the Environmental Defense Fund (EDF) to propose a solution. McDonald’s executive Shelby Yastrow met with Fred Krupp, EDF’s president. They debated saving the PSF clamshell by recycling it or replacing it with a paper-based, more environmentally friendly alternative. Ed Rensi, president of McDonald’s USA in 1990, favored keeping the PSF for its insulation qualities, protective rigid composition and low cost – about two cents each.

Franklin Associates, a consulting company that assesses product life cycles, said that McDonald’s PSF containers were superior because paper packaging is heavier, takes longer to produce and has a dirtier manufacturing process. Customers focused only on the bulky clamshell...