Summary of The Compatriots 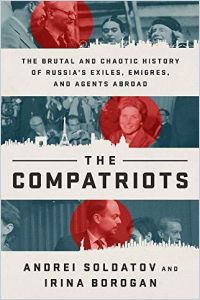 Thirty million Russians live outside Russia – but not beyond the reach of the Kremlin. In a series of compelling stories, respected Moscow-based journalists Andrei Soldatov and Irina Borogan explore the past century of Russian history through the lens of its community of expatriates, examining the complex connections between Russian émigrés and their mother country. Soldatov and Borogan’s eye-opening text provides an essential piece of the puzzle for serious students of Russian politics today, as well as a ripping, spy-novelesque tale of espionage, loyalty, betrayal, romance and patriotism.

Andrei Soldatov and Irina Borogan are cofounders of Agentura.ru and authors of The Red Web and The New Nobility. Their work has been featured in The New York Times, The Moscow Times, the Washington Post, Le Monde, CNN and the BBC.

The Kremlin views Russian émigrés as both threats and assets.

The Russian diaspora – currently the world’s third largest at more than 30 million people – forms part of the so-called “Russky Mir”: the world of Russian speakers, tied to the mother country, whether they live within it or abroad. Émigrés have often sought to change Russia, or attempted to influence Western opinion about the country from abroad. For instance, Vladimir Bukovsky, founder of the American Foundation for Resistance International, attempted to spur mass defections from the Soviet army in Afghanistan in order to weaken the USSR’s militarily. Former FSB officer Alexander Litvinenko wrote the book Blowing Up Russia, claiming that the FSB – Russia’s domestic security service – had staged the 1999 bombings in Moscow to fuel Vladimir Putin’s presidential bid.

During the Cold War, US State Department officers looked within emigrant communities for individuals who might serve in a new government after Russia’s defeat. They also attempted to form political refugees into so-called liberation committees that would stir up resistance in Communist-occupied ...