Summary of The Confessions of Marcus Hutchins, the Hacker Who Saved the Internet 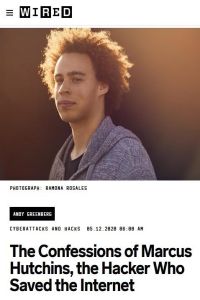 Few things in life are black-and-white. Neither is the story of Marcus Hutchins, a gifted computer programmer who perfected his trade creating malware and later came to save the online world from a debilitating cyberattack. In an intimate portrait of Hutchins for Wired, technology journalist Andy Greenberg lays out Hutchin’s life story, inviting readers to form their own moral conclusions. Anybody interested in cybersecurity – or just a riveting life story – will want to read this article.

Marcus Hutchins developed a passion for computers and computer programming as a young boy.

Marcus Hutchins, son of a nurse and a social worker, grew up in quiet rural England. He developed a fascination for computers and code early on and started to join hacking forums when he was a young teenager.

He learned how to steal passwords, and went on to run his own botnet, taking control of more than 8,000 computers. He also programed his own malware. All of that earned him approval and respect from his peers. At age 15, he started his own business hosting illegal sites, such as phishing pages.

As a teenager, he routinely produced malware, but became uncomfortable when a paying client nudged him into enabling financial cybercrime.

At age 16, Hutchins began to earn money building a rootkit, called UPAS Kit, for an anonymous client named “Vinny.” A rootkit allows users to gain remote control over another person’s computer. Following UPAS Kit’s successful launch, Vinny wanted Hutchins to add a web inject that would allow users to intercept client-server communication and commit online bank fraud. When Hutchins refused to build it, Vinny had someone else develop...

So much for the decentralized internet
8
Are You Managing Your Risks from Social Media?
7
The Malicious Use of Artificial Intelligence
8
The Unaddressed Gap in Cybersecurity: Human Performance
9
Biased AI Is Another Sign We Need to Solve the Cybersecurity Diversity Problem
7
What Is Cloud Computing?
9