Summary of The Confidence Code

HarperBusiness, 2014
Copyright © 2014 by Katty Kay and Claire Shipman. Published by arrangement with HarperBusiness, an imprint of HarperCollins Publishers
ISBN: 9780062230621
Pages: 232 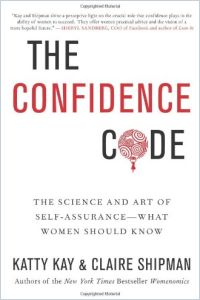 Katty Kay and Claire Shipman, journalists and authors of Womenomics, interviewed successful women in a range of fields including sports, politics and business – and discovered that many, even the most successful, lack confidence. The authors investigate whether men really have more confidence than women. They find that confidence trumps competence at work. For example, women often lack the confidence to voice their opinions, even though such reticence hurts their chances for promotion. Women prove especially reluctant to negotiate for better salaries and often ask for less money than men request. After interviewing geneticists for insight, the authors report that confidence has a strong genetic component, though environment also matters. While much of their treatise is discouraging, it does offer hope. With effort, you can become more confident. Boost your confidence by speaking up and taking strategic steps; do not overthink your decisions. getAbstract recommends the authors’ insights and research to women – and men – who struggle with a lack of confidence, and to parents who want to instill confidence in their children.

Despite women’s great societal strides, their self-doubt persists. Women believe that hard work and effort pay off, even though that isn’t always the case. Many women have seen less-competent men receive promotions and higher earnings. Confidence seems to trump competence; research found that “success correlates more closely with confidence than it does with competence.”

In some arenas, like basketball, you can’t fake confidence. Monique Currie and Crystal Langhorne, forwards for the WNBA’s Washington Mystics, are commanding on the court. But Currie admits to struggling with a lack of confidence. As she says, “You have to believe in what you can do and you have to believe in your ability.” Langhorne feels each loss and hates to let her fans down, but adds, “With guys, if they had a bad game, they’re thinking, ‘I had a bad game.’ They shrug off the loss more quickly.”

The Mystics brought in coach Mike Thibault to invigorate the team. Having coached both men and women, Thibault has a unique perspective. He finds that “the propensity to dwell on failure and mistakes” creates female players’ “biggest psychological impediments” and often will “directly...

Girl, Stop Apologizing
8
The Fix
9
The Book of Gutsy Women
9
Why Men Win at Work
8
The Memo
9
The Ambition Decisions
9