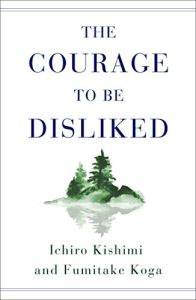 The Courage to Be Disliked

The review below was first published in the getAbstract Journal on Aug 27, 2021.
We’ve reviewed this title for you as we currently cannot offer a summary.

Ichiro Kishimi and Fumitake Koga, who are followers of Adlerian psychology and best-selling authors, present Adler’s principles in the form of an accessible fable.

Ichiro Kishimi is a certified counselor and consultant for the Japanese Society of Adlerian psychology. Fumitake Koga, his co-author and also a devotee of Adlerian psychology, is a best-selling author. Here, they discuss psychologist Alfred Adler – a contemporary of Freud and Jung – through a dialogue between a young man and an older philosopher. This meaningful work has sold more than 3.5 million copies in Asia.

Western readers are likely to regard it as a Socratic exchange. Eastern readers, and those familiar with Eastern thought, will recognize it as a classic Confucian conversation in which an elder person schools a younger person in the correct ways of being or thinking without ever stating directly what behavior this requires. The youth must, to a degree, figure things out for himself or herself.