Summary of The Decadent Society 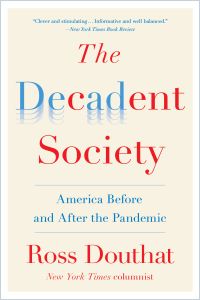 The review below was first published in the getAbstract Journal on Feb 18, 2021.
We’ve reviewed this title for you as we currently cannot offer a summary.

Conservative political analyst, blogger and New York Times columnist Ross Douthat – author of Bad Religion: How We Became a Nation of Heretics and To Change the Church: Pope Francis and the Future of Catholicism – finds little to love in contemporary society. He maintains that modern societies don’t progress. Their economies, politics and culture have become “decadent,” weary and static, without direction or optimism, says Douthat – and that was before COVID-19!

Writing amid political and cultural turbulence, Douthat poses questions about the future of affluent Western societies that no one – including him – could possibly answer. His conclusions may prove either dated or prescient or both.