Summary of The EEAG Report on the European Economy 2014 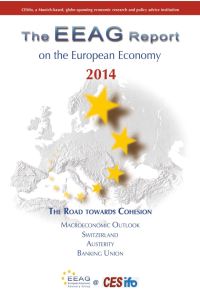 Each year, eminent economists with the European Economic Advisory Group of CESifo, a European research institution, gauge the fiscal and monetary well being of the euro zone as it slowly attempts to grow into a single, fully unified entity. Their analysis of 2013 compared to 2012, published in February 2014, details the region’s year-over-year economic circumstances, as well as its needs for further reforms. In particular, developing a single banking system for the euro zone remains problematic. The report examines the results of austerity since the sovereign debt crisis and proposes that Switzerland might provide a good model from political and economic unity. Policy makers and finance professionals who need a detailed précis on how the European economic situation evolved in 2013 will find this report valuable. Its only downside may be a tendency to equivocate, a common characteristic of economists – even more so, perhaps, when six of them collaborate on a compendium about a very fluid situation. Nevertheless, getAbstract recommends this comprehensive report for its trenchant, useful insights.

Europe’s overall economy improved in 2013, bolstered by the US- and UK-led global rebound. Concerns about the euro, the euro zone’s debt and the European banking system have abated for now, but EU leaders must maintain their efforts at budgetary and regulatory restraint and ensure continued cohesion among member nations. Even so, no one can know for sure if the spate of recent reforms will provide a strong enough scaffolding for the euro zone’s precarious economy. Profound fiscal and monetary issues linger; policy makers and the populace remain cautious in their optimism; high unemployment continues to depress several national economies; and in some nations, rising sovereign debt levels are also troubling. To avoid backsliding or disintegrating, Europe must continue to maintain discipline and forward movement toward political and economic unification.

Estimates suggest that global GDP will rise by 3% in 2014 after increasing by 2.3% in 2013. The pace of growth has varied regionally. For several years, emerging nations led in economic development, but in 2014, developed nations outpaced them, and growth increased modestly. This trend...

And the Weak Suffer What They Must?
8
Tales from a Crisis
8
EU Debt as Insurance Against Catastrophic Events in the Euro Area
8
Risk Reduction Through Europe’s Distressed Debt Market
8
Revisiting the Economic Case for Fiscal Union in the Euro Area
7
Europe
7