Summary of The Enduring Lure of Conspiracies 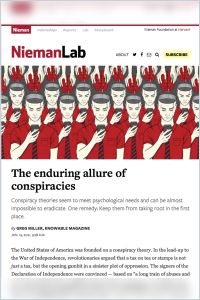 Events like the January 6, 2021 attack on the US Capitol show the powerful effect of conspiracy theories. Writing for NiemanLab, Greg Miller outlines who embraces conspiracy theories and why. He finds that political leanings on their own don’t explain much. People yield to conspiracy theories because it helps them feel that they understand complex, scary events. These ideas take root via the brain’s built-in heuristics for managing information and making sense of the world. Miller notes that preventing the spread of conspiracy theories is easier than shaking them loose once they take hold.

Greg Miller, senior writer at Wired and a former staff writer for Science, focuses his reporting on science and technology.

Conspiracy theories are not new, but some today may be especially dangerous.

As long as society has had politics, it’s had conspiracy theories about politics. Researchers disagree on whether there are quantitatively more such sagas in circulation now than in the past, but conspiracy theories certainly seem more front and center in political life today.

The recent conspiracy theory about the “stolen” United States’ presidential election manifests a new twist: It is all conspiracy with no real theory – merely repeated baseless claims with no substantive evidence onlookers can debate. Because it delegitimizes fundamental pillars of political life – the ballot box, free press, governmental institutions and societal norms – it poses a genuine threat to democracy.

Conspiracy theories appeal most to people at the extremes of the political spectrum.

Psychologists and political scientists study the question of who is more prone to subscribe to conspiracy theories. People on both extremes of ...

Facebook, QAnon and the World’s Slackening Grip on Reality
9
The Mainstream Media Won’t Tell You This
8
You Can Handle the Post-Truth
8
In 2020, Disinformation Broke the US
9
She Helped Wreck the News Business. Here’s Her Plan to Fix It
9
Coronavirus in China Fuels Crowd Psychology
8