Summary of The Firm 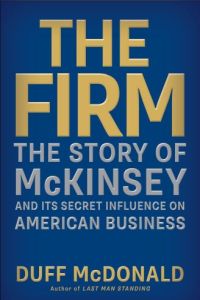 The 20th century saw the rise of American economic dominance and the birth of modern management. One firm – McKinsey & Company – did more to shape American business and influence global commerce than perhaps any other. From a handful of consultants in the 1920s to more than 10,000 at the turn of the 21st century, McKinsey is an undeniable success story. Organizations including Fortune 500 companies and national governments have sought its advice for almost 100 years. Yet behind the successes are guarded secrets involving catastrophic failures, disastrous recommendations, fraud and even jail time for its leaders. Journalist Duff McDonald’s balanced, penetrating account of McKinsey’s extraordinary achievements and spectacular failures can be repetitive, but still reads like a thriller. getAbstract recommends this century-long tale of ambition and hubris to business leaders interested in strategy, HR VPs seeking insights into talent management, and to all consultants.

Duff McDonald is a business journalist, editor and biographer based in New York City.

Since McKinsey & Company was founded in the 1920s, it has maintained its position as the most admired, envied, prestigious and highest-priced consulting firm in the world. Yet it remains an enigma, cloaked in mystique and secrecy. Though its public face displays self-confidence bordering on arrogance, many question the value of McKinsey’s advice and, given recent scandals, some have wondered whether the firm can or should continue.

In 1926, James McKinsey, a mathematics professor at the University of Chicago, wrote the first books telling businesses about using budgeting for strategic advantage. He realized that organizations needed help understanding how to boost organizational performance by making better decisions about expenses, revenues and profit.

With a national meat packing company as his first client, McKinsey launched McKinsey & Company. He resigned from the university and opened offices in Chicago and New York. By the late 1920s, McKinsey was the highest-paid consultant in America, and McKinsey & Company had clients in the banking, steel and retail industries. McKinsey officially left the firm in 1935 to become the chairman and ...

Temp
9
Go Long
8
Transforming Nokia
9
The Deals That Made the World
8
Women, Minorities, & Other Extraordinary People
9
The Gig Is Up
8