Review of The First Conspiracy 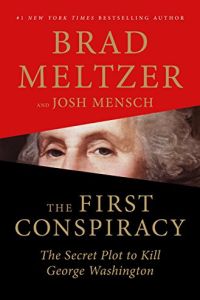 From the JFK assassination to Russian meddling in the 2016 election, Americans love a good conspiracy theory. One such plot is the little-known caper narrated in this accessible account by novelist Brad Meltzer and documentary television producer Josh Mensch. The authors delve into Britain’s scheme to kill George Washington during the American Revolutionary War. The English knew the colonial forces had little hope of winning the war without their savvy and selfless General. So, Britain devised a plot that involved paying off members of Washington’s personal security team. This is how, according to Meltzer and Mensch, the events unfolded:

Brad Meltzer is the author of The Escape Artist, The Inner Circle and other bestselling thrillers. Josh Mensch is a writer and documentary producer.

The British, the authors recount, nearly succeeded at sabotaging the American Revolution before it got started. How did they do that? Meltzer and Mensch explain: They managed to compromise men and a woman in George Washington’s inner circle as part of a secret plot to kill the general. Appointed the Continental army’s Commander-in-Chief in 1775, Washington faced the tall task of organizing ragtag bands of colonial militias into a force fierce enough to take on the mightiest army on earth. Because the colonial investigation into the spycraft and treason targeting Washington was deemed sensitive and top secret, the details of the conspiracy have remained shrouded in mystery for centuries. Today, the authors write, many of the details remain unclear – yet, according to them, there’s no doubt that such a scheme existed, and that at least one soldier was publicly executed for his role.

Washington, Meltzer and Mensch write, was born in the colonies, and he grew up in a rural part of Virginia. After his father died when he was just 11, Washington turned to his older half-brother, Lawrence, for guidance. The worldly, well-educated Lawrence coached the country boy in social graces and otherwise expanded Washington’s worldview. Then, in 1752, when Washington was 20, Lawrence died of tuberculosis. The authors go on to tell how the devastated Washington worked for a few years as a land surveyor before deciding to follow in Lawrence’s footsteps and become a military man. Once in uniform, they write, Washington impressed his superiors to such an extent that, at just 21, he was charged with leading expeditions in the French and Indian War.