Summary of The Founder’s Field Guide for Navigating This Crisis 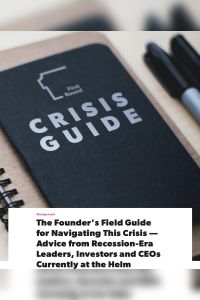 The coronavirus pandemic means that little in these times is stable or predictable, and what worked a few months ago won’t work now. People who start and lead companies need to raise money, bring together the right team and deliver a valuable product or service. But times of crisis test leaders, and entrepreneurs need advice from people who navigated past downturns and can advise them about how to plan and move forward. This field guide from the venture capital firm First Round provides philosophical and practical advice for founders trying to guide new companies through these unusual and difficult times.

First Round is a venture capital firm that specializes in providing seed-stage funding to technology companies. Founded by Josh Kopelman and Howard Morgan, it focuses on portfolio companies’ growth during their first 18 months.

Recessions can take a year to hit bottom and founders need to know what they are up against.

According to Josh Kopelman, one of the Founding Partners at First Round, many of today’s younger founders were in school during the Great Recession of 2008 and might lack a clear sense of the current economic environment.

Over the past half century, recessions have tended to last around 12 months before they hit bottom. Quick recoveries are possible, but so are long, drawn-out recessions. Whereas the recessions of 1980 and 1990-91 lasted less than a year, the Great Recession continued for 18 months. Founders of new companies need to understand the possible trajectories they face.

New founders can respond to the onset of an economic crisis in a variety of ways. Most experienced leaders advise that behaving as though nothing is happening is not a reasonable option. The best approach is to act fast but thoughtfully. Coming up with a plan is crucial. In devising a plan, remain open-minded about what the future holds and how the recession may play out. Under the circumstances you may now ...