Summary of The Fourth Age 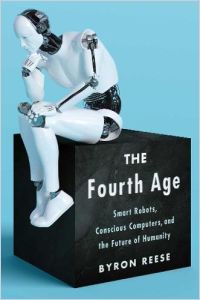 Major changes in human history derived from technologies. Fire was the first technology. Language was even more powerful; people could share ideas and cooperate in a dangerous world. After two more eras defined by agriculture, cities, the wheel and writing, computers now usher in a new era. Robots and artificial intelligence (AI) raise questions about what it means to be a human being. Byron Reese’s expansive, wide-ranging treatise will engage anyone fascinated by questions about the human future, as long as you don’t expect easy answers.

Byron Reese is the CEO and publisher of the technology research company Gigaom and also founded several high-tech companies. He has spent most of his life exploring the interplay of technology and human history.

Human history has passed through three technological ages: language and fire, agriculture and cities, and writing and wheels.

Three major fundamental technological changes in history shape human life. In this context, “technology” means the use of material and processes to enhance human physical or mental capacity. In the first age, the original human technologies were fire and language. Around 100,000 years ago, people learned to create and control fire. Predators fear fire, so fire offered a degree of protection. It also provided warmth, which enabled people to migrate to colder climates. Fire allowed people to cook, making food easier to chew and to digest.

Language enabled people to communicate information and ideas and to cooperate to survive. Language permitted human imagination to soar and made poems and storytelling possible.

The second human age, which began around 10,000 years ago, pivoted around agriculture and cities. Cultivating food demanded a geographically settled lifestyle, which led to founding cities near fresh water and fertile land. Agriculture and cities led to the division of labor, the private ownership...

Are Robots Competing for Your Job?
9