Summary of The Fourth Revolution

Penguin, 2014
© 2014
From THE FOURTH REVOLUTION by John Micklethwait and Adrian Wooldridge. Summarized by arrangement with Penguin Press, an imprint of Penguin Publishing Group, a division of Penguin Random House LLC
ISBN: 9781594205392
Pages: 305 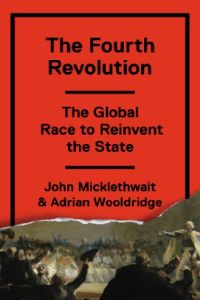 In this critique of the modern welfare state, British journalists John Micklethwait and Adrian Wooldridge argue in favor of the Ronald Reagan-Margaret Thatcher agenda of less government. They suggest that modern governments are out of control, and they offer compelling examples – such as the US government’s ill-fated public housing projects and George W. Bush’s embrace of the surveillance state. Treading in ideologically tricky territory, Micklethwait and Wooldridge work to offer a measured tone and reasonable prescriptions. While always politically neutral, getAbstract finds that this study will intrigue policy makers and interested citizens wishing for solutions to the seemingly intractable challenges of government bloat.

Editor in chief of Bloomberg News John Micklethwait is a former editor in chief of The Economist, where Adrian Wooldridge is managing editor. They co-wrote five books, including The Company: A Short History of a Revolutionary Idea and The Right Nation: Conservative Power in America.

To understand the out-of-control impulses of modern nations, consider Augustus Gloop, the gluttonous child in Roald Dahl’s Charlie and the Chocolate Factory. Just like young Augustus, who gorged himself on Willy Wonka’s river of chocolate, the modern nation-state grows ever more torpid and greedy. The welfare state continues to do more and more, even as it becomes less and less effective. Progressives spur it on, envisioning a role for government in every corner of modern life. The “Leviathan” of big government is now out of control.

Since the Great Depression, states have grown beyond the role of creating order and enforcing the rule of law. Over the decades, states in North America, Europe and Asia erected safety nets that added old-age pensions and health care. George W. Bush expanded the girth of the US government more than any president in decades. In 1913, US government spending was just 7.5% of gross domestic product. By 1937, the share soared to 19.7%, then to 27% in 1960, 34% in 2000 and 41% in 2011. Britain’s government budget as a share of GDP jumped from 13% in 1913 to 48% in 2011.

How Much Will a Trade War Hurt Your Company?
8
Anti-System Politics
8
Why Liberalism Failed
5
The Constitution of Liberty
8
Squeezed
8