Review of The Future 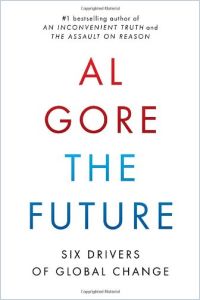 Some people might be satisfied with two terms as US vice president, a Nobel Peace Prize, an Academy Award for the climate change documentary An Inconvenient Truth and a Grammy for the spoken-word version of the book of the same title. Not Al Gore. He has more work to do in service of the cause that means so much to him: the fate of the planet. In this paradigm-changing bestseller, Gore describes six drivers of how the world will change in the coming future. Those six cover pretty much everything: 1) Globalization; 2) technological shifts in war, commerce and the environment; 3) corporations’ potential to rival or surpass nations in economic and political power; 4) unsustainable flawed economic growth; 5) revolutions in “genomic, biotechnology, neuroscience and life sciences” changing fields from agriculture to medicine; and 6) the break in humanity’s connection with the Earth. The Future is an omnibus – a guide to how almost every aspect of life on Earth will change in the coming era of commodity shortages, natural resource depletion and global climate change. It can serve as an effective textbook or policy manual. It’s the perfect volume to keep by your bed and read a little of at a time. Best of all, The Future is authoritative – objective, well researched and written in simple prose. Gore’s compendium will prove helpful and reliable for years to come.

The Future also covers the impact of the Citizens United US Supreme Court case granting corporations the same rights as individuals; how fracking and other profit-seeking technologies pollute the Earth; China’s matching young people with their professions according to genetic profiles; and the far-ranging impact of global warming, including the loss of crucial boreal forests in Russia and other northern nations. Gore’s myriad citations can be downright terrifying: For instance, since the early ’80s, frackers have injected about 30 million gallons of “toxic liquid waste” into more than 680,000 wells. He uses statistics to tell multilayered, significant stories quickly. For instance, China has spent $100 billion on life sciences research since 2010, and has persuaded 80,000-plus Chinese grad students who earned PhDs in elsewhere to return to China.

The US Supreme Court decision in the Citizens United case granted corporations the same rights as individuals. Gore calls this a coup for reactionary political forces because it means corporations can donate money directly to candidates to buy increasingly expensive political ads. Now that a few big corporations own most US mass media and can control the means of communicating with the public, Gore cautions that censorship and propaganda will become even more serious issues. When print dominated, public access to mass media was easier. Once, ordinary people could afford newspaper ads. Now giant corporations can charge enormous fees for access to TV time and print ads. Gore warns that US elections now are at the mercy of the candidates who can raise the most money. To garner the staggering sums needed for modern political campaigns, candidates must mortgage their positions on issues to their sponsors – “wealthy individuals, corporations and special interests” that seldom prioritize the public good.