Summary of The Gig Economy 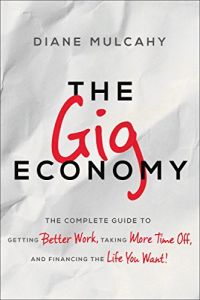 Full-time employment, once the quintessence of security and stability, is increasingly rare. Employers create fewer full-time positions and outsource existing work. For growing numbers of job seekers, working independently is a safer bet. Living without a corporate safety net may sound precarious, but with proper planning, you can manage a freelance career that’s at least as stable as a full-time job. And, it holds out the prospect of more control over your work and your life. In this breezy, entertaining how-to manual, Babson College professor Diane Mulcahy offers a blueprint for assembling and managing a diversified portfolio of work. She outlines appropriate approaches to saving, vacations, homeownership and retirement planning. getAbstract recommends her manual to anyone seeking an alternative to the cubicle, the assembly line or the corner office.

Diane Mulcahy is adjunct lecturer at Babson College and a senior fellow at the Ewing Kauffman Foundation. She designed and teaches Babson’s MBA course “The Gig Economy.”

A full-time job was once the reliable route to prosperity and security. Prior to the current generation, workers often stayed with the same company for all or most of their careers. They brought home a dependable paycheck, advanced along a clear career path, and relied on their employers for health insurance, paid vacations and a retirement pension.

No more. Businesses now create fewer jobs: US job creation stayed at 1% from 2008 to 2015. Entrepreneurs start fewer businesses. Start-ups hire fewer people. Employers automate some tasks, and they avoid tax liabilities and benefit costs by outsourcing others to freelancers.

Relying on a single source of income can be risky. Instead, create your own career path and assemble a “portfolio” of freelance or contract jobs – “gigs.” Opportunities in the “Gig Economy” are growing: A study by economists at Harvard and Princeton found that the percentage of Americans in “alternative work arrangements” grew from 10% in 2005 to 15.8% a decade later.

You need to do more than just getting a gig – you need to rethink your understanding of what constitutes a career. Instead of...

The Gig Is Up
8
55, Underemployed, and Faking Normal
9
The Talent Revolution
8
Wake Up and Smell the Coffee
7
Flat, Fluid, and Fast
8
Temp
9