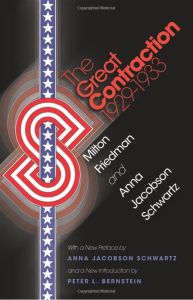 This classic economics text, published in 1963 as part of a larger book on American monetary history by economists Milton Friedman and Anna Jacobson Schwartz, helped provoke the sea change in US inflation fighting that began in the late 1970s. But its relevance today comes from its argument supporting quantitative easing, the early 21st century’s groundbreaking shift in the monetary policies of central banks around the world. The style of this concise work is technical, tenacious and forensic, but diligent readers will find in it enlightening insights into today’s global economic and monetary conditions.

A decline in the stock of money was a crucial factor in the Great Depression.

The Keynesian analysis of the 1930s Great Depression emphasizes the downward spiral of aggregate demand in the economy, with lower demand leading to less production, employment and investment. Its conclusions are that government should have stepped in and, in an attempt at fiscal stimulus, spent borrowed money to halt the decline. But this reasoning neglects the role of the money supply in the Great Depression, a role that would necessitate calling the period instead “the Great Contraction.”

Between 1929 and 1933, the total stock of money in the US economy fell by more than one-third, or about 10% per year, and bank deposits dropped by more than 42%. The economic collapse of those four years underscores the power and significance of “monetary forces.” As the supply of money declined, deflation was the inevitable result, with all its consequences of hoarding, belt-tightening and negative incentives to invest and produce. The conclusion should be therefore that it was not as the “borrower and...

Nobel Prize-winner Milton Friedman (1912–2006) became one of the most influential economists in the world through his work on monetary policy and free market choice. Anna Jacobson Schwartz (1915–2012) was a highly regarded scholar of monetary history.

What is the repo market, and why does it matter?
8

Could Negative Interest Rates in the US Ever Happen?
8