Summary of The Great Leveler 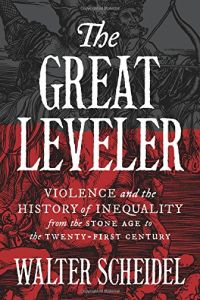 Stanford professor Walter Scheidel argues that more-equal distributions of wealth correlate with calamitous events – world wars, communist revolutions and devastating pandemics. His fascinating analysis covers historic lost empires, the Black Plague, World Wars I and II, the Russian and Chinese Revolutions, and the collapse of Somalia, among many other historical eras and trends, including early agricultural societies and present-day economic circumstances. He believes that the era of widespread warfare, bloody revolution and deadly plague has now faded. Scheidel proves knowledgeable, perceptive and erudite, but at 500-plus pages, this could be tighter. Even so, getAbstract recommends his enlightening, singular study to international investors, global managers, policy makers, NGO activists and academics seeking a fresh analysis of a contentious topic.

Walter Scheidel is a historian and professor of humanities and classics at Stanford University, where he is also a fellow in human biology. He has written several other books.

In 2010, it took the combined wealth of 388 billionaires to match the holdings of the lower-half billions. By 2015, that had shifted: 62 megabillionaires owned as much wealth as the 3.5 billion people on the bottom half of the global income scale. The decades after World War II were a golden age for income equality. The economies of the developed world hit record levels of equality sometime in the 1970s or early 1980s. By the mid-1980s, wealth in North America, Europe and Asia had concentrated into fewer hands. Since 1983, equality has steadily declined. By 2012, the US economy was as unequal as it was in 1929.

Rare episodes of flattening inequality resulted from large-scale disasters. These upheavals fall under the categories...

Prosperity and Justice
8
Is the Solution to Extreme Wealth Inequality Really – Alaska?
9