Summary of The Great Pause Was an Economic Revolution 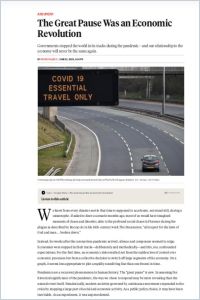 The coronavirus pandemic has forced consumers and corporations alike to reconsider how the world economy works. Political scientist Bruno Macaes cogently argues that COVID-19 has revealed that the economy, long viewed as an autonomous entity impervious to external control, is more akin to a dynamic computer program, one that coders can continuously edit to achieve socioeconomic objectives. His thoughtful commentary offers a fresh perspective on post-pandemic economics.

The COVID-19 recession is unique in its origins and its consequences.

The 2020 economic downturn is unparalleled because it arose not from an inability to manage the economy but from a shared resolve to place vast swaths of activities on hold. Pandemics are not unusual, but the world’s response to COVID-19 is.

“The illusion that economic time cannot be stopped – that the economy is an organic entity outside of social control – was tacitly shattered.”

Authorities’ reaction to the Spanish influenza of the early 20th century was different; commerce then experienced little disruption. The global economy remained relatively unscathed, and the United States even showed some modest growth in 1919. By contrast, the coronavirus pandemic has occasioned a hard stop. The current economic malaise will leave long-lasting wounds, but at the same time it could unleash a new dynamism of “collective power to steer society in new directions.”

Economists used to think of the economy as an autonomous living being.

Theory has long held that markets are self-correcting, innovative, impervious to external forces and much too intricate to program. The 20th-century economists Friedrich Hayek and John Maynard Keynes were ideological opposites, but they, in large part, shared a view of the economy as a living entity.

“The best way to think about the economy is as the longest computer program in the world, composed of continuously evolving, and manipulable, lines of code…These lines of code are interconnected, and even the smallest bug, if left undetected, can lead to a system crash.”

Hayek considered attempts to control the economy as primitive thinking. Keynes questioned the economy’s ability to maintain proper balance without periodic government involvement, similar to a physician administering medical treatment to a sick individual. As with a patient, the economy would, at times, need routine check-ups to ensure its proper functioning. However, a significant shock could bring it to its knees.

In light of the pandemic, some observers now view the global economy as a programmable construct.

In early 2020, modern logistics and information technology made it possible to bring some activities – those that catered to public gatherings, like tourism and dining out – to a screeching halt without shutting down essential services, like hospitals and supermarkets. Industry behemoths Amazon and Walmart accelerated their staffing to meet unprecedented levels of demand for online goods. Robotics mitigated supply chain interruptions. Government aid helped to maintain consumption. That allowed market participants to respond to the pandemic the way computer experts remove large sections of code from complex programs without crashing the whole system, suggesting that the economy may be programmable.

“The ‘great pause’ was predicated on the thesis that social engineering works…The future is not given. The future is programmable. The pandemic will not be remembered as a pandemic but as a revolution.”

The major lesson of COVID-19 could be that a new age of capitalism is possible, because society has the power to engineer the economy to attain specific objectives while maintaining its foundations of socioeconomic order.

Bruno Maçães is a senior nonresident fellow at the Hudson Institute. He was the Portuguese Europe Minister from 2013 to 2015.

Global Economic Outlook 2021: Europe
7
An Effective Economic Response to the Coronavirus in Europe
7
The Pandemic Depression
7