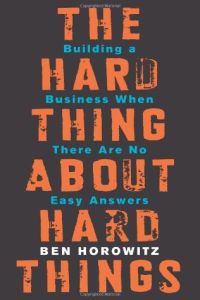 Ben Horowitz guided Loudcloud through life-or-death struggles before selling it to Hewlett-Packard for $1.65 billion. He argues that no formula can promise entrepreneurial success. Horowitz is a first-rate storyteller and a refreshingly irreverent teacher who uses allusions ranging from Jay Z to Clint Eastwood to Dr. Seuss. Any business leader will find worthy guidance in this exhortation to persist through “the Struggle.” getAbstract recommends Horowitz’s part autobiography, part tip sheet to anyone building a company.

Loudcloud, Opsware and “the Struggle”

Every start-up encounters the Struggle. Your product turns out to have costly flaws. Your cash runs low, and your venture capitalist tells you fund raising seems unlikely. A loyal customer leaves you. A valuable employee walks away.

There’s no way around the Struggle and no formula for fixing your problems. Your company might not make it. Entrepreneurs who make it share one characteristic: They don’t quit.

Netscape veterans Ben Horowitz and Marc Andreessen founded Loudcloud, a cloud services provider, in 1999 and soon hit a rocky road. Seven months after they launched Loudcloud – its name marked the first time “cloud” had been used popularly to describe a computing environment – Horowitz and Andreessen had booked $10 million in contracts. They were hiring so fast – 30 employees a month – that workers had to sit in the hallways.

Then came the dot-com crash of 2000; the NASDAQ fell by 10%. Loudcloud needed capital but faced long odds. After Horowitz pitched one set of prospective backers, a colleague told him the skeptical investors “thought you were smoking crack.” Loudcloud raised a total of $120 million, but with so...