Summary of The Humor Code 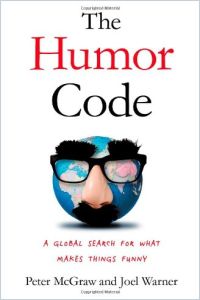 Laughter is one of the most fundamental of human behaviors, but science has never explained it. What makes something funny? Journalist Joel Warner and psychologist Peter McGraw traveled to funny zones across five continents to discover if they could decipher the secret of humor. They got up-to-date with the latest scientific inquiries into humor, joined Dr. Patch Adams’s “clown brigade” in a Peruvian slum, found humor amid the strife of the Intifada, and investigated the hermetic aspect of Japanese humor. The answer they found is: Humor and laughter are a mystery. Their adventures offer a highly entertaining narrative. Business readers will find value in their brief section on funny ads and their insights into psychology. getAbstract recommends this exploration of humor to marketing and PR professionals seeking a deeper understanding of human behavior and the serious side of funny.

Peter McGraw, is a professor of marketing and psychology at the University of Colorado, Boulder, and directs the university’s Humor Research Lab. Journalist Joel Warner has written for Bloomberg Businessweek.

Why do people laugh? Journalist Joel Warner and psychologist Peter McGraw set out on a journey across five continents to answer that question. The two Americans traveled to Tanzania, where they investigated an epidemic of contagious hysterical laughter; to Japan, where they met the directors of a comedy conglomerate; to Los Angeles, where Warner portrayed Boy George’s dog in an improv theater skit; and to Denmark, where they examined the fallout from a series of newspaper cartoons mocking the prophet Mohammad. Along the way, they interviewed comedians, comedy writers, and researchers in psychology, sociology and linguistics.

Laughter is one of humanity’s most fundamental and most mysterious behaviors. Babies laugh long before they can speak. Laughter pervades entertainment, marketing and daily life. It survives amid natural disasters, wars and other dire circumstances. Yet, science has never convincingly explained why laughter evolved or why people find certain things funny.

Students of human behavior have theorized about humor since ancient Greek philosophers Aristotle and Plato proposed the “superiority theory,” the notion...