Summary of The Importance of Being Brave in Marketing 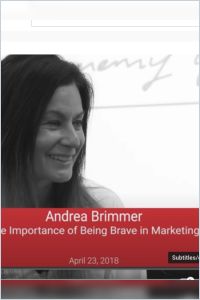 In 2009, Andrea Brimmer faced a daunting task – re-branding a bank during a painful financial crisis. Rather than play it safe, Brimmer and her team created eye-catching ad campaigns that flew in the face of the staid banking industry. By picking out the pain points of the average bank consumer, and showing how Ally Financial would be different, she was able to create a positive image for Ally at a time when people were particularly unhappy with the banking industry. In this matter-of-fact Google talk, Andrea Brimmer reveals important lessons on how to create memorable ad campaigns.

Andrea Brimmer is the chief marketing and public relations officer at Ally Financial.

Marketers have to be brave to break through the noise and gain the public’s trust.

It’s a tough time to be a chief marketing officer (CMO), as they face challenges from both within and outside of their companies. About 80% of CEOs report that they don’t trust their CMO, and CMOs only last an average of 18 months in that position. Meanwhile, marketing messages overwhelm consumers, so it’s difficult to get their attention.

Andrea Brimmer was tasked with branding a bank during the 2008 financial crisis, when the public felt little to no affinity for banks. How do you win the public’s trust at such a time? Ally Financial came up with a mantra: “The world doesn’t need another bank, but it needs a better bank.” With that in mind, they started an advertising campaign that highlighted the ways that Ally would differ from traditional banking. The ads featured children put in ridiculous scenarios similar to situations...

Tony Hawk: What Marketers Can Learn from Skateboarders
9
Working While Black
8
Neuromarketing. The Future of Marketing
8