Summary of The Importance of Small Decisions 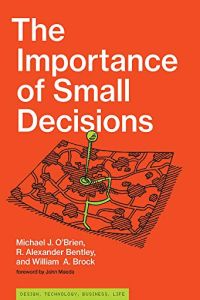 Living things, groups and societies evolve biologically and culturally as they adapt to changing circumstances as specific as, for example, the fate of lion cubs when a lightning strike kills their mother. Michael J. O’Brien, R. Alexander Bentley and William A. Brock address today’s information-processing and decision-making challenges and put them into a larger evolutionary context. They discuss changes in how people adapt and make decisions, and they illustrate these shifts with examples as ancient as stone axes and as contemporary as National Football League star quarterback Tom Brady.

Why hunter-gatherers started agricultural societies about 10,000 years ago remains a pivotal archaeological question. Archaeologists once believed that agriculture emerged in just a few places and then spread. Contemporary thinking says that agriculture emerged at multiple times and in multiple places. One theory suggests that people ascended a “ladder of progress,” starting as savages, becoming barbarians and then achieving civilization. Nineteenth-century thinkers explained cultural differences by arguing that different societies “stalled” during this progression.

Individuals don’t decide what their culture is ready for or which way a larger society should go. What matters is the evolutionary impact of aggregated small decisions.

In his 1984 book, The Origins of Agriculture, botanist and archaeologist David Rindos held that the birth of farming advanced in phases. His model de-emphasizes individual choice and innovation and argues that human action evolved along with planting. People make intentional choices, but the results...