Summary of The Impossible Climb

Dutton, 2019
© 2019
From THE IMPOSSIBLE CLIMB by Mark Synnott Summarized by arrangement with Dutton, an imprint of Penguin Publishing Group, a division of Penguin Random House LLC.
ISBN: 9781101986646
Pages: 416 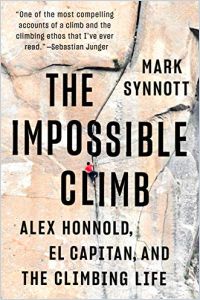 Alex Honnold free solos, climbing with no ropes or protection. A fall from near the top of the 3,000-foot El Capitan, Yosemite’s biggest cliff, would last 14 seconds and prove fatal. But Honnold did not fall. He became the first person to free solo El Cap, as author Mark Synnott watched. He details big-wall climbing history and marvels at Honnold’s strength and grace. The author pulls no punches as he describes feuds, drug use and rivalries among climbing’s most fearless adventurers. Honnold’s feat will inspire climbers and non-climbers alike.

Mark Synnott is a professional climber and writer whose work has appeared in National Geographic, Outside, Men’s Journal and Climbing magazine.

El Capitan towers 3,000 feet over the Yosemite Valley, attracting rock climbers from all over the world.

El Capitan is Yosemite’s largest rock wall. Native Americans called the towering rock face “To-to-kon oo-lah,” or “rock chief,” because from one angle it looks like a man’s head. Physician Lafayette Bunnell translated that name into Spanish in his 1880 book, Discovery of the Yosemite and the India War of 1851. Since then, the wall’s name has been El Capitan. “El Cap” draws rock climbers from around the world.

By the 1950s, Yosemite climbers launched a “golden age” when Royal Robbins and Warren Harding scaled big walls in the valley using ropes and steel pitons. Their use of aid climbing depended on a great deal of equipment, which allowed them to rest on ropes and drill holes in the rock to place their protective gear. Later generations, notably the Stonemasters – a freewheeling group that took over the Yosemite climbing scene in the...