Summary of The Internet Is Rotting 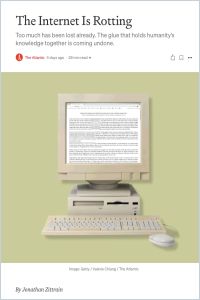 The people who designed the internet weren’t trying to become billionaires. They designed it to be decentralized, anticipating that users would provide content and capacity. As Jonathan Zittrain reports in The Atlantic, when Tim Berners-Lee wrote website protocols, he built in links to take you to the content you want with a click. In today’s world, knowledge that libraries once stored now relies on links for preservation. But links can be unreliable and fall apart, putting vast stores of knowledge at risk. Some initiatives now underway might help.

Jonathan Zittrain is a law and computer-science professor at Harvard University where he co-founded the Berkman Klein Center for Internet & Society.

The design of the internet incorporates decentralization.

The context of the internet’s creation shaped its design. For example, its designers were oriented toward academic issues and lacked the funding to build the web with a top-down, centralized structure. They weren’t looking to monetize the internet.

The internet’s creators had no interest in fashioning a big, for-profit company. They insisted that users would create the internet’s content, and foresaw that those users would become the writers, editors, publishers and producers of the web. The internet wouldn’t have executives. It would never go public.

That design does not ensure the preservation of content.

In the spirit of do-it-yourself freedom, Tim Berners-Lee wrote the code for websites, and he gave it away for free. These web pages could link to content anywhere else on the internet, which meant that content outside a certain web page would still be at users’ fingertips.

The institutions that historically preserved writing – and thereby knowledge – had many virtues. Their construction protected manuscripts from deterioration...

She Helped Wreck the News Business. Here’s Her Plan to Fix It
9
The Supply of Disinformation Soon Will Be Infinite
9