Summary of The Invention – and Reinvention – of Impeachment 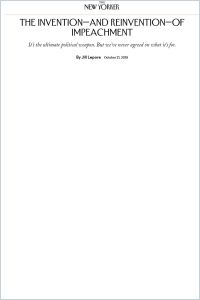 Impeachment is an unpredictable political process, not least because of a dearth of precedent. In this study of the history of impeachment, historian Jill Lepore provides much-needed perspective on modern-day impeachment debates. Lepore explores why impeachment became a part of American politics, how past impeachments have defined – or attempted to redefine – what is or is not an impeachable offense, and the ways increased partisanship has rendered impeachment proceedings both more common and less effective than ever before.

Jill Lepore is Professor of American History at Harvard University and a staff writer at The New Yorker.

The English invented impeachment as a legal tool to curtail the power of kings.

In 1376, the English Parliament invented impeachment as a tool for dismissing ministers executing orders from the King which parliament deemed unacceptable. Impeachment served as an indirect check on monarchial power, as there was no mechanism for Parliament to get rid of their ruler directly.

Yet Parliament was able to use the tool of impeachment only on rare occasions, particularly since Parliament was only in session at the request of the King – and a king wouldn’t summon Parliament if there were reasons to believe that it would impeach royal ministers. In the 17th century, Edward Coke, a Member of Parliament and legal thinker, successfully argued that the Magna Carta of 1215 established parliamentary supremacy and that Parliament was not only free to convene whenever it wanted to, but that it also had the right to impeach ministers when warranted. Yet after England became a constitutional monarchy by putting legal limits on the power of the monarch, impeachment became...

Burnout: Modern Affliction or Human Condition?
7
Will This Year’s Census Be the Last?
9
These Truths
10
The Disruption Machine
9
Are Robots Competing for Your Job?
9

What You Need to Know About Voting – and Why
8