Summary of The John Deere Way 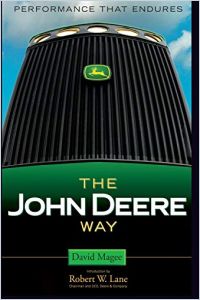 This sincerely earnest book is a good example of why corporate biography remains, perhaps, the most problematic business-book genre. While the book is well researched, author David Magee apparently found it hard to avoid the trap of laudatory language about current management. To write a book like this, you need corporate help and access. Most employees won’t even talk to an author without a go-ahead from the top. This means that, even without Deere & Company’s roots date to 1836, when a blacksmith named John Deere moved from Vermont to the frontier settlement of Grand Detour, Illinois. Deere set up a shop that could provide stout hayforks, horseshoes and wagon parts. He talked with farmers, who complained that it was very difficult to plow the dense Midwestern turf. Plows made in the Northeast didn’t work in the rich heavy soil. In 1837, Deere decided to devise a plow that would scrape off the topsoil, turn it over and let it glide off the plow. Even without an explicit quid pro quo, corporate biographies tend to become trapped in a sort of literary Stockholm syndrome, dependent on their sources for their own survival. That cautionary flag raised, this book provides a worthwhile portrait of one of America’s stalwart agricultural companies. Deere & Company’s values are as plain and honest as the face of a farmer atop his Deere tractor. Although the book would have been more engrossing if it offered pictures and sharper anecdotes, particularly from times when things didn’t go well, getAbstract.com recommends it to those interested in agriculture, corporate histories or values-driven management.

Deere & Company’s roots date to 1836, when a blacksmith named John Deere moved from Vermont to the frontier settlement of Grand Detour, Illinois. Deere set up a shop that could provide stout hayforks, horseshoes and wagon parts. He talked with farmers, who complained that it was very difficult to plow the dense Midwestern turf. Plows made in the Northeast didn’t work in the rich heavy soil. In 1837, Deere decided to devise a plow that would scrape off the topsoil, turn it over and let it glide off the plow.

Deere tested his concept when he acquired a broken sawmill blade. He put a curve in it and created the "self-scouring steel plow." This improved the lot of Midwest farmers dramatically. However, the idea took a while to catch on; in 1838, Deere only sold 10 plows. That number rose to 40 in 1840 and 75 in 1841. Like a tractor chugging downhill, the John Deere company was off and running.

Just as important as his mechanical ability, however, was John Deere’s management legacy. During the 22 years he ran his company, he established its four core values: "quality, innovation, integrity and commitment." Although Deere and Company has grown to become...