Summary of The Knowledge

Penguin Press, 2014
© 2014
From THE KNOWLEDGE by Lewis Dartnell. Summarized by arrangement with Penguin Press, an imprint of Penguin Publishing Group, a division of Penguin Random House LLC
ISBN: 9781594205231
Pages: 352 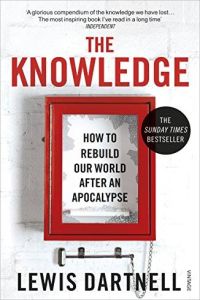 Astrobiologist Lewis Dartnell of the UK Space Agency presents an imaginative, engrossing and useful “thought experiment” exploring how people could rebuild society after its destruction. Assuming you’ll never have to use it, Dartnell’s fascinating compendium may still provoke your sense of wonder as you see how every item you wear, use or eat in daily life involves so much history and genius. If preparing for the worst is your avocation, this compendium offers an outline of everything you need to worry about and prepare for long-range. Given that Dartnell can cover only the iceberg tips, he zips through lots of material very fast. He explains so quickly what reviving some technologies will demand that unless you’re already familiar with them, you’ll hope that a supplemental manual might also survive this imaginary cataclysm. getAbstract recommends this work to those interested in history, technology, science fiction or survivalism.

Lewis Dartnell, PhD, is a science writer and an astrobiologist. He is a professor of science communication at the University of Westminster. He has written many articles and the book Life in the Universe.

The End of the World

Civilization has ended – whether through war, human accident or natural disaster, perhaps an asteroid strike. The specifics don’t matter for this “thought experiment”; just imagine that modern civilization is gone. Most people are dead and 99% of those who remain aren’t survivalists, so they never stockpiled food and supplies, or learned survival skills. They may inhabit a violent world and – since civilization filled the atmosphere with CO2 – they could face chaotic weather.

Survivors will have the same priorities as people who unexpectedly find themselves lost in the wilderness, like plane crash victims: Water, food, shelter and warm clothes come first. Survivors could start fires with matches, lighters, glass lenses or sparks from a battery. Local clean water systems will run dry or be ruined by whatever disaster is afoot. Survivors should fill bathtubs, sinks, buckets, and the like as soon as possible. Keep the water away from light to suppress algae. Search for bottled water in office buildings and markets. Water that doesn’t come from a sealed source must be purified. Boiling it is...