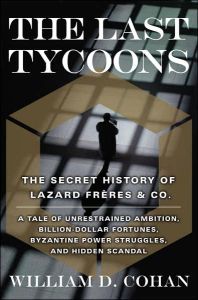 The Secret History of Lazard Frères & Co., the World`s Most Elite and Enigmatic Investment Bank

If investment banking and the history of big deals fascinate you, getAbstract invites you to sit down with this compelling history of Lazard Frères & Co., from its humble beginnings through its astounding success. The stories of the dominant personalities who used the Lazard mystique to garner unbelievable fees are legendary. As a former journalist and Lazard banker, William D. Cohan has the skill and qualifications to tell this story. While he covers many of Lazard’s biggest men and biggest deals, he never bogs down in technical details. The author focuses on the firm’s leaders, and shows their personalities, strengths and foibles. These stories cover shocking self-interest and staggering amounts of money. This large book has a cast of hundreds; it is attributed carefully and well-indexed, though it could use a personnel timeline. Cohan keeps you on track by focusing on the men who led Lazard over the 157 years that it was a family firm. Many of the personal revelations are quite sensational and the book is almost always entertaining.

The Origins of Lazard

Lazard Frères & Company is a legendary Wall Street firm. Smaller than Goldman Sachs, Morgan Stanley or Merrill Lynch in their heydays, it built tremendous prestige and power. Lazard traditionally earned its fees with its brains rather than financial capital. For 157 years, its value lay in the wisdom of the great bankers that ran it. Lazard has provided advice, connections and business methods worth billions to clients who paid bountiful millions.

The firm’s four founding brothers began with a store in New Orleans, but after a fire destroyed it, they made an arduous move to San Francisco and focused on outfitting miners. By 1855, in need of a bookkeeper, they sent home to France for Alexander Weill, a young cousin. The firm evolved into a financial-services house that bought and sold gold and currencies. The brothers, their half-brother David Cahn and Weill signed a 14-year partnership agreement creating Lazard Frères & Co. in San Francisco and Lazard Frères et Compagnie in Paris. By the time the firm joined the New York Stock Exchange in 1888, it had seven partners. Nonfamily members joined as partners, but ownership remained in the family...

William D. Cohan won awards as a journalist before becoming an investment banker. Cohan worked at Lazard for six years before moving to other investment banking positions.