Summary of The Leadership Campaign 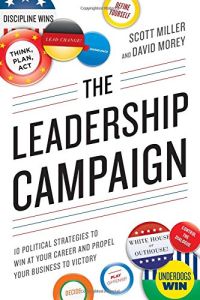 Few professionals know how to exploit the similarities of political campaigns and business promotions better than in-demand strategy consultants Scott Miller and David Morey. Miller worked with Vaclav Havel, Boris Yeltsin, Vicente Fox and Corazon Aquino. Morey advised five winners of the Nobel Peace Prize and both Barack Obama campaigns. Together, they explain how to control the competitive dialogue – either in politics or in business, every campaign represents an extended dialogue with targeted groups – and why it’s crucial to go for the win, and never the tie. getAbstract recommends the insights of these seasoned strategic consultants to marketers, branders, start-ups and entrepreneurs.

Scott Miller founded the Core Strategy Group with David Morey. Miller, former creative director of McCann-Erickson, worked with Steve Jobs at Apple and also founded and sold the Sawyer/Miller strategic consultancy. Morey is also the co-author of The Underdog Advantage: Using the Power of Insurgent Strategy to Put Your Business on Top.

The Value of “Insurgency”

Amazon is a leading insurgent firm and Jeff Bezos is a successful insurgent leader. In true insurgent fashion, Amazon started out by upending the bookselling industry. Now Amazon sells almost every other consumer product over the Internet, where it has the same outsized impact on retailers as it did among booksellers. Amazon has a market value of $250 billion; and Bezos is the fifth-richest person on the planet, according to Forbes.

Other innovative and influential insurgent firms include Apple, Google and the Gap stores. These companies and other masters of disruption take business directly away from incumbent firms. That’s how insurgents threaten incumbents – it’s a zero-sum game.

Despite that danger, incumbent firms usually respond to the challenge of insurgent firms with passivity. They “ignore” the insurgent, “deny” its existence and “react” in a way that “takes years” to unfold. The typical incumbent response is unfocused and exhibits little urgency. Eventually, undeterred by any push back, insurgents replace incumbents.

When they win, new incumbents must remain true to their revolutionary instincts. Otherwise, some new upstart...