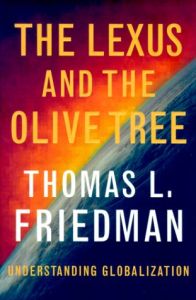 The Lexus and the Olive Tree

A Special Abstract on Global Terrorism Based on Selected Chapters

In the wake of the horrific terrorist attacks against the World Trade Center in New York and the Pentagon in Washington there is a nearly universal response: "How could such a thing happen?" While it will take weeks, months or even years before that question is fully answered, journalist Thomas Friedman has taken a close look at the mindset of what he calls the "Super-Empowered Angry Men" who use terrorism as a weapon against the U.S. In describing the worldview that permits and encourages the use of violence against American civilians, Friedman identifies a scorching resentment of U.S. power, affluence and culture. This resentment has increased exponentially with globalization, which, ironically, has provided the angry men with the very tools and technology that allow them to personally strike at the U.S. After this week, there is no doubt that these men - and the violent rage that drives them - are now America’s greatest foe.

All Roads Lead to Rome

At the height of the Roman Empire, it was said that all roads lead to Rome. But as the Romans expanded their roads into new territories, they discovered a funny thing about roads: They go both ways. The same roads that brought the Roman Legions abroad later carried the Vandals and Visigoths who sacked Rome. So it could be with globalization.

Through the end of the Cold War, the greatest threat to United States security came from enemy states and competing superpowers. Individuals or private groups did not have the resources or reach to seriously threaten the country with harm. But globalization has changed all that.

In the 21st century, the greatest danger the U.S. faces is the Super-Empowered Angry Man. Globalization is seen by many as the expansion of American imperialism, dominance and hegemony. This makes many people angry. At the same time, globalization is decreasing the importance of distance through efficient travel and communications and spreading powerful technology to all corners of the world. In short, globalization is super-empowering these angry men.

Super-Empowered Angry Men range from the ...

Thomas L. Friedman is the Foreign Affairs columnist for the New York Times He has won two Pulitzer Prizes for his reporting as Times bureau chief in Beirut and Jerusalem. His first book, From Beirut to Jerusalem won the National Book Award in 1988.

Thank You for Being Late
8

That Used to Be Us
9

The World is Flat
8

From Beirut to Jerusalem
8

The Lexus and the Olive Tree
8