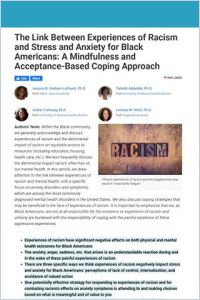 Many people consider racism primarily as social injustice. Yet victims of racism don’t suffer only from unequal access to resources and blatant discrimination. Many also internalize their negative external experiences and develop anxiety disorders as a result. This Anxiety.org blog post shines some light on this often-neglected aspect of racism. It describes the link between racist experiences and mental health issues, and provides coping strategies. You’ll benefit from the advice whether you are a victim of racism or want to offer support to someone who is.

Experiences of racism have a significant impact on the mental health of black Americans.

Studies suggest a direct link between experiences of racism – such as frequent but subtle “microaggressions” as well as overt discrimination – and mental health problems, including anxiety and stress. Some 25% of black Americans will develop an anxiety disorder over their lifetimes. What’s more, black Americans suffering from anxiety take longer to recover from the condition, and are less likely to seek or complete mental health treatments in comparison with the general population.

Racism can trigger anxiety in a victim through “perceptions of lack of control,” “internalization” and “avoidance of valued action.”

Racism negatively affects black Americans’ mental health in three ways. First, consistently feeling that the world around them is unsafe or that they will remain at a disadvantage vis-à-vis other Americans – no matter how hard they work – can generate feelings of helplessness and a lack of control over their circumstances. These feelings, in turn, can trigger anxiety.

“The expectation that hard work, determination and living according to society’s rules will lead to fair treatment is continually shattered by experiences of racism.”

Second, victims of racism tend to internalize the negative stereotypes they encounter on a daily basis, including the beauty ideal of fair skin and soft hair. The unconscious acceptance of these biases can lead to poor self-esteem and psychological distress.

Third, experiences of racism can prompt black Americans to withdraw from social interactions or avoid situations that might expose them to more negative experiences. In doing so, they deprive themselves of pursuing their goals and dreams, and of doing what gives their lives pleasure and meaning – all of which can help overcome anxiety.

Victims of racism can stave off anxiety responses by focusing on their values, embracing their negative emotions and exercising self-compassion.

Three coping strategies can help black Americans stave off anxiety responses to their experiences of racism:

The Antiracism Starter Kit
9
Race and the Newsroom
8

The Last Water Fountain: The Struggle Against Systemic Racism in Classical Music
9
The Biggest Risk in Business Right Now Is Grief
9

Menopause Is Different for Women of Color
9 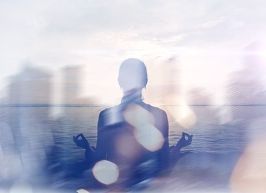