Summary of The Management Myth 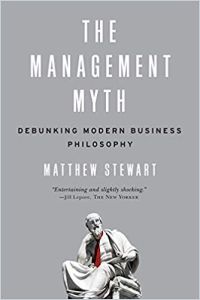 Each year, a thousand or so new business books join the tens of thousands already published. In many, the authors – often, “business gurus” or consultants – sell their advice with a level of certainty approaching fact. Former consultant Matthew Stewart takes a different view: He demolishes the notion of management as science. From Frederick Winslow Taylor’s stopwatches and measuring tapes to Tom Peters’s “eight fundamental principles” for excellence, Stewart exposes the flawed research and outright deceptive traits of popular management gurus and consulting firms. Stewart emphasizes the negative over the positive, and has a lot of fun weaving in his own hilarious and sometimes tragic years as a strategy consultant. While management consulting – like most fields – has both genuine experts and brazen charlatans, anyone considering hiring a consultant, becoming one or implementing the latest, greatest business idea should read this first.

Matthew Stewart, PhD, studied philosophy at Princeton and Oxford universities, and writes for The Atlantic and other publications.

Neither a Science Nor a Profession

Hundreds of thousands of people earn MBAs annually, but people with MBAs tend to perform worse in business than those without business degrees. Management consultants – typically, new MBAs – flood the workplace, inventing theories and practices. But business isn’t a science, a technology or a profession. Its false prophets mislead organizations and society; they obscure what really makes organizations successful.

Frederick Winslow Taylor invented management science more than 100 years ago. He supposedly could measure how much workers should achieve each day, and precisely how they should carry out their jobs for maximum efficiency. Taylor suggested incentives to spur workers to greater productivity by slavishly following managers’ orders and never showing initiative. Taylor believed his principles held universally across all industries and jobs. New MBA programs followed from Taylor’s ideas, including Harvard University’s.

Taylor’s scientific management process wasn’t scientific; he made most of it up. For example, in determining that a steel worker should ...