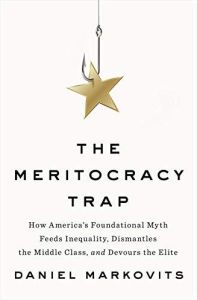 The review below was first published in the getAbstract Journal on Nov 4, 2020.
We’ve reviewed this title for you as we currently cannot offer a summary.

Yale law professor Daniel Markovits explains – using telling statistics and hard-nosed analysis – how meritocracy in the United States is not as democratic as it appears and how it excludes the vast majority of workers.

Author Daniel Markovits, a professor at Yale Law School, understands that belief in merit as the basis of success is as American as apple pie. But meritocracy, he insists, is not as democratic as people presume. He maintains that those who get into top schools – like Yale – and go on to high-income jobs benefit from intense grooming only the privileged can afford.

Markovits’s fascinating treatise centers on the fact that middle- and lower-class people pay a high – and often invisible – price for living in a so-called meritocratic system. The New York Times Book Review found his book, “ambitious and disturbing…” The Boston Globe reports that Markovits, “produces shocking figures about the yawning wealth gap…”