Summary of The Motive 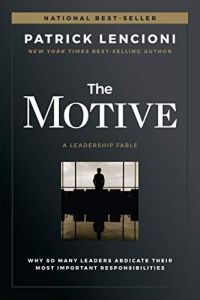 Bestselling business author Patrick Lencioni garnered fame for offering storytelling analogies to inspire leaders and to drive home his insights about leadership. Picking up where Aesop left off, Lencioni uses the familiar form of a fable to explain why top leaders, especially CEOs, should always let their mission be their greatest motivation. His inspirational storybook will help executives identify their purposeful motives and embrace their duties as servant leaders.

Patrick Lencioni, the author of 11 business books with nearly seven million copies sold worldwide, is founder and president of The Table Group consultancy.

Shay Davis became a CEO for the wrong reason – but he did something about it.

Shay Davis had been the CEO at Golden Gate Security, a San Francisco firm, for only six months, and things weren’t going well. He worried that his hold on his new job was shaky.

As CEO, Davis was responsible for the firm’s progress, and it wasn’t growing as fast as other local security companies. Davis’s company could not compete with All-American Alarm, the dominant player in the home and small business security market. Davis believed he had less than a year to make Golden Gate Security a winner before the board bounced him out.

In need of expert business advice, Davis called Lighthouse Partners, a well-respected California consultancy. Unfortunately for Davis, Del Mar Alarm, a San Diego firm that routinely got under his skin, was one of Lighthouse Partners’ most prominent clients. Davis could not stand Del Mar Alarm’s CEO, Liam Alcott, a British citizen, whose profitability made him the subject of constant press adulation.

Davis was jealous that Alcott seemed so great at running a home-security firm since the job was challenging him so much.