Summary of The New Case for Gold

Portfolio, 2016
© 2016
From THE NEW CASE FOR GOLD by James Rickards. Summarized by arrangement with Portfolio, an imprint of Penguin Publishing Group, a division of Penguin Random House LLC
ISBN: 9781101980767
Pages: 192 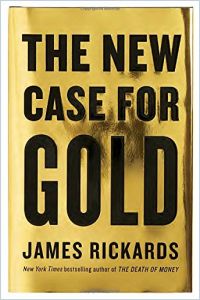 Financial guru James Rickards is a contrarian, skeptical of central banks and critical of Wall Street. He offers a measured analysis of gold as an asset class and a sober look at the forces that affect its value. Rickards is bullish on gold – he sees its price rising one day to $10,000 an ounce, but at times, he can seem a bit paranoid. He regards inflation as a socialist tool of wealth distribution and frets over the specter of confiscatory government policies. After reading his concise advice, even an optimistic investor might consider gold as a hedge. While never giving investment advice and affirming that the opinions herein are entirely the author’s, getAbstract recommends his thoughtful, surprising approach to investors seeking another view on gold.

James Rickards wrote the bestsellers The Death of Money and Currency Wars. He is the editor of the newsletter Strategic Intelligence.

For all its compelling and redeeming qualities, gold remains a maligned asset. “Famous gold bashers” include an array of economic and financial luminaries such as Milton Friedman, Paul Krugman, Alan Greenspan, Barry Eichengreen, Nouriel Roubini, Warren Buffett and Barry Ritholtz. These naysayers – who span age groups and ideological perspectives – see little value in gold as an asset or as the foundation of a monetary system. They reject any embrace of a gold standard. Gold bashers like to cite economist John Maynard Keynes as the source of the claim that gold is a barbarous relic. This misinterprets his position. In his 1924 book Monetary Reform, Keynes wrote, “The gold standard is already a barbarous relic.” Keynes referred not to gold itself but to the gold standard as England applied it in the 1920s and 1930s.

Keynes’s critique of Great Britain’s gold exchange was spot on. In 1914, Keynes supported the gold standard – a decades-old tradition. But as World War I began, many nations dropped it and printed government-guaranteed money to pay for the war. Keynes argued that staying on the gold standard would boost the United Kingdom’s credit...

The Death of Money
7

Silver, Sword, and Stone
9
The Financial Crisis and the Free Market Cure
7
Making Up Your Own Mind
9
WOLFPACK
8
Why Trust Matters
8
Dark Towers
8