Summary of The New China Scare 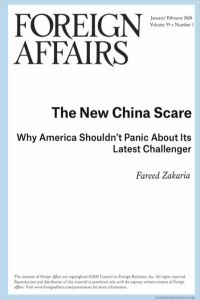 The state of US-China relations are tense. Yet the economic concerns – such as intellectual property theft and Chinese protectionism – which are fueling the current trade war between the world’s two largest economies, are only one aspect of Americans’ increasingly negative views about China. Fareed Zakaria dissects the core assumptions behind Washington’s growing determination to confront and contain China and explains why they are not only faulty and hypocritical, but also, dangerous. His piece offers solid counterpoint to the noise of the daily news cycle.

Fareed Zakaria is an American journalist, political scientist and author.

Anti-China attitudes today are widespread and span the US political spectrum.

A broad political consensus has emerged in the United States in recent years: China is a vital threat to America, both economically and strategically. A core assumption behind this new consensus is that decades of US efforts to engage and open China up, both politically and economically, have failed to spur significant internal reforms and check China’s strategic ambitions. Consequently, so the thinking goes, the United States must confront China much more aggressively than before.

Americans tend to discount the many successes Washington’s carrot-and-stick approach toward China has produced.

Since the United States reestablished diplomatic relations with China in the 1970s, America has pursued a combined policy of engagement and deterrence toward China. While helping China to integrate into the international economic and political system, the United States has remained firm in...

Ten Lessons for a Post-Pandemic World
7

Is Taiwan the Next Hong Kong?
8
The Sources of Chinese Conduct
7
Global Risks 2035 Update: Decline or New Renaissance?
8

We Have Been Harmonised
9