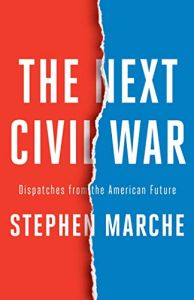 The Next Civil War

Dispatches from the American Future

The review below was first published in the getAbstract Journal on Mar 10, 2022.
We’ve reviewed this title for you as we currently cannot offer a summary.

The End of the Experiment

America has gone from being a global leader to a polarized, divisive and paralyzed nation, and it might well descend into civil war, says prolific novelist, essayist and Esquire editor Stephen Marche in this chilling work of nonfiction. Though he bases his writing on detailed research, Marche constructs scenes of America’s possible future with a novelist’s narrative drive, offering readers a chilling hypothetical portrait of the downfall of a divided nation.

After Joe Biden defeated Donald Trump in the 2020 US presidential election, calls arose for violent resistance. But Marche explains that extreme antigovernment rhetoric has spurred the American right toward armed domestic conflict – a civil war – since Barack Obama’s 2008 election.

The United States of Sanctions
Book