Summary of The Next Pandemic 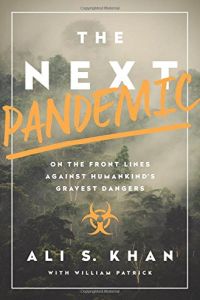 Virologist and epidemiologist Ali S. Khan takes readers on an eye-opening, entertaining journey through his many assignments and adventures as a “disease detective” for the US Centers for Disease Control and Prevention. Writing with business writer William Patrick, Khan explains that plagues may capture the headlines for weeks or even months, but when they’re over, people tend to forget about them – until the next outbreak. He illustrates the importance of managing disease disasters and makes sensible recommendations for prudent approaches to future epidemics. While never giving medical advice, getAbstract recommends Khan’s engaging read to anyone interested in epidemics, bureaucratic efficiency and social justice.

Ali S. Khan, MD served the US Centers for Disease Control and Prevention for more than two decades, specializing in infectious disease, biological terrorism and issues of health security. William Patrick is a book doctor, editor and ghostwriter. He is the co-author of Loneliness: Human Nature and the Need for Social Connection and two novels about bioterrorism.

Immunologist and epidemiologist Ali S. Khan served at the US Centers for Disease Control and Prevention (CDC) for almost 25 years. He and his team tackled numerous disease outbreaks around the world and responded to the anthrax attack in Washington, DC, in 2001 and to disaster conditions in New Orleans after Hurricane Katrina. The CDC determines how well local health systems can handle each emergency, analyzes the disease or threat of disease, and conducts field studies. Khan discovered that often “simple intervention” – like promoting handwashing or providing pure water – made a positive difference.

One of the most serious diseases Khan investigated is influenza. The CDC sent Khan to Fairbanks, Alaska, in 1992 to investigate a possible flu outbreak. The 1918 flu epidemic killed 675,000 people in the United States; it was part of an international outbreak that killed between 50 million and 100 million people globally. A 1918-type epidemic could recur, so epidemiologists remain vigilant about flu.

The flu virus, which travels “very efficiently” from person to person, can experience ...