Summary of The Next Rules of Work 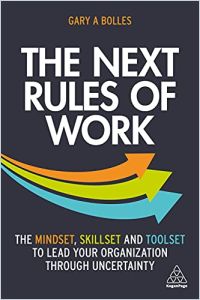 The modern economy can be unsettling. Educator and consultant Gary Bolles feels your pain and understands that the rules of work are changing almost as fast as people can learn them. In this guide to thriving in the modern economy, Bolles cites research suggesting that the shelf life of a four-year college degree is just five years – and even less in Silicon Valley. He advises individual workers and bosses that succeeding in today’s world requires an ability to adapt and learn continually.

Gary A. Bolles, chair of the future of work at Singularity University and a partner at Charette LLC, a San Francisco consulting firm, co-founded eParachute.com – inspired by his father’s best-selling classic, What Color Is Your Parachute?

The world of work is changing quickly for workers and bosses.

“Old Rules” have long dominated modern companies. Under this ethos, bosses embraced the idea of management-by-surveillance. If a worker wasn’t in the office, the thinking went, he or she must be slacking. The cubicle, which furniture maker Herman Miller invented in 1968, exemplified the concept of command-and-control management.

This innovation in maximizing office space didn’t catch on at first, but eventually cubicle farms became the normal working environment. Workers endured long commutes to arrive at a place where their bosses could supervise them. The old mind-set applied to the organization itself, which created scarcity by limiting the number of workers and enforced that scarcity through hierarchical models of supervision. Bosses called the shots and workers obeyed.

Followers of the “Next Rules” embrace a different mind-set. Individual workers contribute creative solutions to complex problems and pursue their own list of responsibilities. Employees no longer focus only on completing predictable assignments. Modern employees mix and match the stability of a day job, the uncertainty...

The Future of Work and Learning
6