Summary of The Orange Revolution 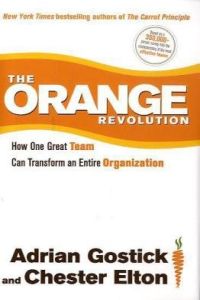 Consultants Adrian Gostick and Chester Elton feature illuminating, instructive cases and anecdotes on nearly every page. Yet their book is far more than just a collection of captivating tales from the business world. It also contains invaluable information, all solidly research-based, on how to construct highly effective teams. These best practices form the bedrock of the authors’ “Orange Revolution.”

Adrian Gostick is the author of several books on corporate culture, including the bestseller The Carrot Principle, which he co-wrote with Chester Elton, a motivation and recognition expert.

Anthropologists used to believe that during the Stone Age, only the luckiest cave dwellers were able to hunt and kill huge, dangerous beasts to feed themselves and their families. Today, scientists contend that prehistoric cavemen adroitly worked together in teams to hunt prey they could not possibly kill alone.

How did ancient cavemen accomplish the difficult task of slaying such enormous animals as woolly mammoths? Each tribal hunting team leveraged the personal strengths of its individual members: The best trackers would locate the prey, leaders would direct where the individual cavemen should position themselves for the kill, and the most expert spear throwers would wound the mammoth. The hunting party would run the animal down, even if their deadly endurance race took days before the mammoth finally collapsed. The triumphant cavemen would then gather around the fallen beast and slay it for food.

Indeed, since the origins of mankind, human beings have been disposed to join groups and make use of teamwork. Such teams can do both, they leverage personal strengths and they compensate for personal deficiencies. Therefore, the team provides ...