Summary of The People vs. Democracy 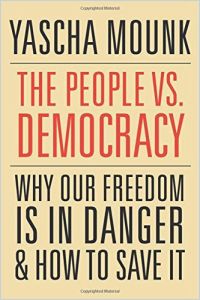 Many people use the word democracy to describe anything they deem just and desirable, while hastily labeling anything they dislike as “undemocratic.” This catch-all definition of democracy can mask the ways liberal democratic systems can crumble: how they can become illiberal while remaining democratic, or undemocratic while remaining liberal. According to Yascha Mounk, a German-American political scientist and Harvard lecturer, this decoupling of ideals is precisely what is occurring in many places in the world today. The young are becoming disillusioned by democracy, and more open to electing a strongman populist leader who disregards democratic norms and sidesteps checks and balances in the name of “getting things done.” Though many may believe, initially, that such a leader represents the legitimate voice of the people, by the time the people recognize that a sole voice can’t accurately reflect the nation’s population, the institutions that protect individual rights are on the decline. Is Mounk’s argument depressing? Very. But is it also convincing? Absolutely. If you think that liberal democracy is worth saving, his book is worth the read.

Yascha Mounk is a political scientist and lecturer at Harvard as well as executive director of the Tony Blair Institute for Global Change. His work has appeared in The New York Times, The Wall Street Journal and Foreign Affairs.

Do minarets belong in Switzerland? Ali Erdoğan thought so, though many of his neighbors disagreed. Erdoğan applied for a permit to build a minaret, but it was rejected by his town’s Building and Planning Commission. Undaunted, he took his request to Switzerland’s Supreme Court, which gave permission to begin construction. Switzerland’s Turkish community rejoiced, but not for long. A 2009 popular referendum altered the Swiss constitution so it now states that the “freedom of religion and conscience is guaranteed” but “the construction of minarets is prohibited.” Critics around the world suggested that the move to prohibit construction of a religious symbol was undemocratic. But what does that label mean, really? After all, by almost any definition, there’s nothing more democratic than a popular referendum: The people voted, and the majority vote was written into the constitution.