Summary of The Pioneers 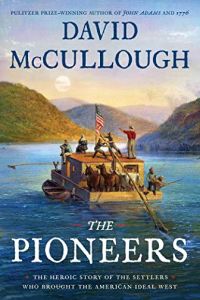 When New England pastor, lawyer and doctor Manasseh Cutler, 45, set out in 1787 for Congress in New York, he was making history: urging passage of the Northwest Ordinance, guaranteeing that the new Ohio territory – where his sons later settled – would ban slavery. By 1850, after deprivation, struggle and conflict, frontiersmen in Ohio opened the doors for many more pioneers. Historian David McCullough’s gripping, smoothly written story details the vision, endurance and eccentricities of the first pioneers. Though his account of the Native American perspective has stirred critique, McCullough set out to create a compelling pioneer narrative and in that he has greatly succeeded.

Winner of two Pulitzer Prizes and two National Book Awards David McCullough is also a recipient of the Presidential Medal of Freedom. His books include The American Spirit: Who We Are and What We Stand For and The Wright Brothers.

When Manasseh Cutler urged passage of the law forbidding slavery in the new Ohio territory, he was making history.

When New England pastor, lawyer and doctor Manasseh Cutler, 45, set out in 1787 for Congress in New York, he was making history: urging passage of the Northwest Ordinance, guaranteeing that the new Ohio territory – where his sons later settled – would ban slavery.

Cutler lacked frontier experience, but he had a letter of introduction from the president of Harvard College, a degree from Yale, and qualifications as a doctor, lawyer and pastor. Cutler had wide-ranging curiosity, especially in the sciences. He investigated astronomy, meteorology and the natural world. He corresponded with scientists in the United States and Europe and wrote the first treatise on the flora of New England. When he traveled to New York from Massachusetts, he brought a cabinet for collecting samples of plants he hoped to discover on his trip.

In 1786, Cutler and other Revolutionary War veterans devised a plan for the settlement of the vast Northwest Territory.