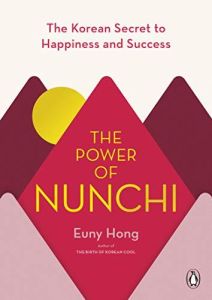 The Korean Secret to Happiness and Success

Learn how to read a room and act accordingly with the aid of nunchi, an ancient Korean way of being.

Nunchi – a 5,000-year-old practice which translates as “eye-measure” – enables you to ascertain people’s thoughts and emotions, according to Korean-American author, journalist and “nunchi ninja” Euny Hong. She attempts to guide non-Koreans, especially Westerners, in understanding this fundamentally Korean practice. Hong proves commercially au courant; other Eastern authors, such as de-cluttering specialist Marie Kondo, have found great success instructing Westerners in practices from their cultures.

Hong is a seasoned, successful journalist. Her book The Birth of Korean Cool: How One Nation Is Conquering the World Through Pop Culture is translated into seven languages and underscores her experience parsing Korean culture for non-Korean audiences. Winner of a Fulbright Beginning Professional Journalism Award, Hong has written for The New York Times, The Wall Street Journal and The Washington Post. She also wrote a novel, Kept: A Comedy of Sex and Manners. She’s an able, skilled author.