Summary of The Price of Inequality 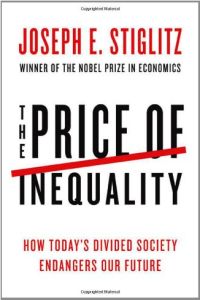 Nobel Prize-winning economist Joseph E. Stiglitz explains why the idea that deregulation and minimal government are good for the economy – and, therefore, for all Americans – is a myth. He tallies up the consequences of unequal income and wealth distribution, now approaching US levels last seen just before the Great Depression, and explains that this disparity has hobbled America’s progress. The per capita US gross domestic product, or total economic activity, has grown almost every year from 1980 to 2010, while the inflation-adjusted pay of most American males with full-time jobs has declined. But Stiglitz warns that the top 1% isn’t the only culprit: Government creates inequality through tax policies, poor management of globalization and other means. Disillusioned Americans, by not voting, increase the political power of the wealthy and add to inequality. Though always politically neutral, getAbstract recommends this cogent, often unsettling analysis of economic imbalances and their perils to anyone concerned about the future of the US and the world.

Nobel Prize-winning economist Joseph E. Stiglitz teaches at Columbia University. He is the best-selling author of Globalization and Its Discontents and Making Globalization Work.

Income inequality is a core issue in America. The concentration of income among the richest earners has soared since the 1980s. In 2007, after-tax income averaged $1.3 million for the top 1% of income earners and $17,800 for the bottom 20%. The United States’ gross domestic product (GDP), or total economic activity, continues to grow, but the economy doesn’t work for the majority of US citizens. Increasing imbalances in income and wealth between the richest citizens and the rest augur numerous economic, political as well as social consequences.

The US’s current “alarming level” of inequality resembles the social divides of the 1920s, just before the Great Depression. America’s economic growth has been stronger during periods of diminished inequality – for example, in the years following World War II and in the 1990s.

Recent research shows that just 42% of Americans think that inequality has risen since the turn of the 21st century, even though the rise “has been tectonic.” Studies show that Americans are overly confident about their social mobility and their ability to increase their income, beliefs...

People, Power, and Profits
8
The American Economy Is Rigged
8
The Great Divide
9