Summary of The Reputation Economy

Crown, 2015
From the book: THE REPUTATION ECONOMY: How to Optimize Your Digital Footprint in a World Where Your Reputation Is Your Most Valuable Asset. Copyright 2015 by Tall Tree Enterprises, LLC and David C. Thompson. Published by Crown Business, an imprint of the Crown Publishing Group, a division of Penguin Random House LLC.
ISBN: 9780385347594
Pages: 256 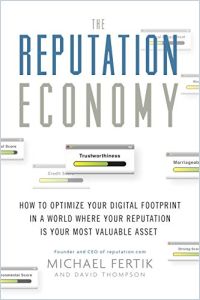 Online companies and organizations collect swaths of your data, hoarding it for later processing. You buy a product here, you give a like there, you post a slightly snarky tweet – and they all become part of a rich, permanent trail of numbers for “Big Analysis” algorithms to categorize and score. These algorithms judge your reputation and then rank you as somewhere between a luminary and nobody. Reputation guru Michael Fertik and privacy expert David Thompson explain the game-changing technology involved in turning raw material into a burgeoning “economy.” Then, they present its consequences: estimating your fitness, health, integrity, fidelity, competence, and other traits, and turning them into factors others can rate, score and, potentially, exploit. getAbstract recommends the authors’ exploration of this brave new online world to entrepreneurs, sharing economy innovators and anyone who spends time online.

Entrepreneur and reputation expert Michael Fertik advocates for digital privacy and reputation management in his books. In 2006, he founded Reputation.com, where David Thompson is privacy officer. Thompson also consults, edits and writes on privacy and strategy issues.