Summary of The Rich Cut Their Spending. That Has Hurt All the Workers Who Count on It. 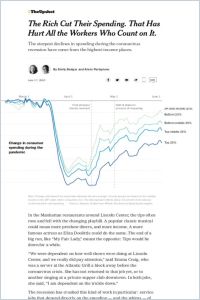 Historically, the service industry provided work to the unemployed in other sectors during US economic crises. But things are different in the 2020 coronavirus recession. COVID-19 has hit the services sector the hardest. This brief overview by journalists Emily Badger and Alicia Parlapiano highlights that government aid has propped up low-wage workers’ income. But their future is precarious without a return to pre-COVID-19 spending patterns, especially those of the rich.

Low-wage service workers make up a much larger share of the economy in 2020 than in the past. And their economic well-being is more closely tied to spending by the rich. Restaurant servers who work for tips especially feel the pinch.

““The recession has crushed this kind of work in particular: service jobs that depend directly on the spending — and the whims — of the well-off.””

For example, a popular show at Lincoln Center in New York City brings a great deal of revenue from theatergoers to servers at nearby restaurants.The spread of COVID-19 closed down these income-producing venues, decimating service employment that relies wholly on the spending of these affluent patrons of the arts.

The virus-induced recession cut spending precipitously, and recovery is uneven.

Spending dropped for households across all income groups: In March 2020, the top one-quarter of earners reduced their outlays by 36%, compared to the bottom quarter’s drop of 30%. Subsequently, government support boosted the spending of low-wage workers significantly, bringing their decline to 5% from pre-pandemic levels.

““This particular economic shock — one that has halted much in-person spending, even by rich people who never lost their jobs — has been devastating for an economy in which many low-wage workers count on high-income people spending money.””

Consumption by the well-off, however, has not rebounded anywhere near as much. One study estimated that the top-income quartile is responsible for roughly 50% of the total cut in spending in the COVID-19 recession. Neighborhoods with the highest incomes have experienced the sharpest decreases in small business revenue and hourly employment. Near Lincoln Center, business income dropped by 72% at the most extreme point, and it remained down by 50% in mid-June 2020.

High earners’ consumption fuels a greater share of the American economy than it did in the 1970s. Consumption-related jobs, like those in restaurants and salons, had been the saving grace of the modest wage earner in past recessions, when blue-collar work was a larger segment of the economy. Had a similar economic jolt befallen the economy in 1970, it would have had far less serious effects on the service industry. But in 2020, service work has been devastated, while high earners maintain their incomes by working from home. The recession has had an outsized effect on people of color and Hispanic heritage, who comprise much of the service industry.

““In good times — or even in more typical downturns — proximity to the rich affords lower-wage workers a higher degree of job security.””

Coronavirus has put a spotlight on the considerable direct connections between the rich and the poor. Pending a public health resolution to the pandemic, service workers will likely continue to endure a precarious situation.

How is COVID-19 affecting US trade?
8
Global Socio-Economic Losses and Environmental Gains from the Coronavirus Pandemic
7
The Great Pause Was an Economic Revolution
9
Latin America’s Lost Decades
8
Getting Serious about the Economic Response to COVID-19
8

Only Saving Lives Will Save Livelihoods
8